According to our source, and it’s a damn good source a local politician current or former is involved in that case 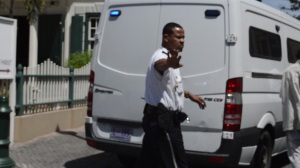 According to our source, and it’s a damn good source a local politician current or former is involved in that case… here’s the whole story…. A large quantity of drugs was found at Princess Juliana Airport after the arrival of an Insel Air flight from Curaçao yesterday morning. Eyewitnesses said Customs, police and a prosecutor were present when the plane was searched.

The Daily Herald understands that senior Customs officer S. has been arrested in connection with the find. Customs Department head Anthony Doran was asked to comment on the case, but said he could not give any information at that moment.

A brief press release issued by police spokesperson Inspector Ricardo Henson late on Thursday confirmed the drugs seizure. “On Thursday, January 30, 2014, during a search by the Police Force Sint Maarten at Princess Juliana International Airport, in cooperation with the Customs Department, a large batch of narcotics was seized,” Henson stated.

“A Customs officer was also arrested for his possible involvement in this case,” he added. “An amount of drugs was seized during a search conducted in his home. The investigation is being conducted by the Police Narcotic Department.”