SO NOW FRANS SUPPOSED TO BE HAVING ‘HEART ISSUES’? OR IS THAT JUST WISHFUL THINKING?

1) They’re claiming that Frans Richardson came down with some heart issues last night. Whether it was a heart attack, or heartburn… or HEARTBREAK I don’t know. Nobody would be surprised, but it could be just wishful thinking.

2) Sarah Wescot Williams is continuing to pretend that she has no idea what Cornelius is up to, and that he has not contacted her to let her know his position. Well he has contacted her, and that’s according to Sarah’s shadow, Ramona. According to Ramona, Cornelius de Weever did send Sarah Wescot Williams a TEXT MESSAGE letting her know that he would not change his mind, his alliance with Theo was a Fait Accompli…. a Fato Consumado! It is a done deal.

3) Theo according to sources wants to see Leona Marlin as President of Parliament, and Gracita Arrindell as Prime Minister. Whether he will use Doc Lloyd as the Minister of Health, remains to be seen, but that move would only strenghten Theo Heyliger.

4) Leona Marlin is a very valuable commodity right now- and she KNOWS it.

6) Frans was bragging and boasting according to sources that he was going to cost Miguel de Weever his job. It doesn’t matter whether Connie and Miguel get along or not, I don’t think the de Weever family were going to sit back and align with politicians threatening to screw over their family.

7) William Marlin who lost 2200 votes since the last elections, was not humble at all, and was saying that he had won anyway, because he was appointing himself Prime Minister. Some feel that if William had shown a little humility, he would not be in this situation right now.

8) Theo and Cornelius already handed in their signed agreement for the new government coalition, so the NA and DP can keep pretending that they are not sure, but everyone else is.

9) Sarah wants to act hurt now, but Sarah knows Leroy de Weever……. WHEN DOES A CANDIDATE DECIDE TO GO INDEPENDENT?

When they realize that their leader couldn’t give two sh*ts about them, and woud throw them under the bus in a heartbeat for their own best interest. Sarah like Frans made a lot of big plans, but would not include Connie. When Connie contributed, his input was derided and laughed at by Ferrier etc etc etc. Cornelius might be young, but he is still an adult. Frans did the same thing with Leona- and when you are not including your own people in the negotiations, you’re putting your own best interest first, so don’t be surprised when they do the same.

10) Some are claiming that it really irated certain people when Antonio Aventurin was running around bragging that he had passed the screening to become a Minister……….. This is rumor, but some felt that Silveria’s selection was ‘personal’.

11) Rodolphe Samuel right now is supposed to be looking out for ‘his own best interest’…. 🙂

12) Leroy de Weever is a scamp, and has always been a scamp- and that was what Sarah LOVED about him… until he turned on her…. 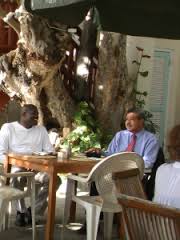 LOOK AT THE PHOTO ABOVE… I TOOK THAT PHOTO AS SARAH HAD LEROY ARRANGING THE ‘CARNIVAL COUP’ WITH PATRICK-FRANS AND ROMAIN. SO IN THE ABOVE PHOTOS, SARAH HAPPILY HAD LEROY DROPPING THE GOVERNMENT FOR HER. AFTER THE ABOVE NEGOTIATIONS WERE DONE. THEN YOU SAW SISTER SARAH STEPPING DOWN SPEENTJE ARCADE, IN THE DARK OF NIGHT – TO FINALIZE THE AGREEMENT, AND TO THROW DOWN THE GOVERNMENT… 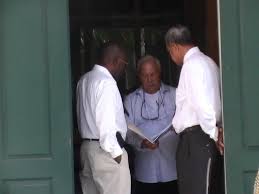 THE ABOVE PHOTO IS ALSO BY ME… IT IS LEROY DE WEEVER AND HIS BUDDY ROY MARLIN – WITH PATRICK ILLIDGE ATTORNEY, COR MERX NEGOTIATING ANOTHER GOVERNMENT FALL…. ARRANGED BY WHO???

OUR DEAR SISTER SARAH, THAT’S WHO!

Everybody KNOWS why Leroy de Weever STOLE my tablet-thinking that he was gonna get confidential files and emails. Leroy is mad at me, not because I did anything to him….. It’s just that the Mongoose is good at catching the snake….

I am a mongoose, and Leroy IS a snake, and as long as we know our roles in life, there should be no more conflict- but I NEVER let that court case go. And I DO enjoy the fact that although Leroy the Millionaire STOLE my 200 dollar Tablet, it’s been costing him over $200 dollars per hour in lawyers fees since then. So do some basic Wiskunde………… Leroy stole a $200 dollar Tablet in JANUARY out of spite, and since January he’s been paying out the ass to stay out of court, and out of jail……………. 🙂 It’s win win for me 🙂 Taco Stein can stall until doomsday, but women have been proven to have a longer life expectancy than men, so I can wait 🙂

13) Roy Marlin was up and down braggin about how HE was the Mastermind behind the new government.. how HE was getting up at 8 am every morning to put the government together… Really Roy? I was waiting for you two lovebirds (Roy and Leroy) to have your little falling out, and I must say.. it is spectacular, and I’ve been LOVING it.

14) Members of the National Alliance are now referring to Silveria as their CHOSEN leader.. FACT!

15) Yes Patrick Illidge did not show up for the final B.S. meeting.. why should he?? Show up for who??? The people who THREW him under the bus? That’s right Patrick, enjoy your ribs and steak down at Busby’s, while they at Parliament babbling b.s. EVERYBODY KNEW THAT MR CORN HAD BUST A HORN!!! EVERYBODY! So why is Patrick showing up? To do what? The UPP were there in a conference room, laughing their asses off. So they’re only trying to fool the public, because all the insiders already knew.

16) Somebody emailed me that they are RUNNING and hiding from Henry Lynch….. WHY?

You through the guy under the bus with lies and half truths, now I hear people ducking and hiding…

17) Right now behind the scenes several people are trying to secretly negotiate and align with Theo. I hear Theo is very busy right now, but intends to get back to a lot of folks.

18) Right now Sarah Wescot Williams needs to worry less about forming a coalition, and worry more about being prosecuted when it concerns Telem and Digicel.

19) Emil Lee also needs to be watching his back, because he is not as clean as he appears… ahem… according to sources, and right now buckets are being busted all over the place.

20) Right now Bibi Hodge Shaw is blogging on behalf of her sponsor, William Marlin- trying to make Connie feel guilty I guess… but it won’t change a damn thing.

Ask Bibi Ho Shaw if she was calling for the stoning of our government, after the Carnival Coup, when Frans, Romain and Patrick defected…

WHERE WAS HER OUTRAGE THEN???

LEROY DE WEEVER HATES MY GUTS BECAUSE HE FEELS EVERYTIME HE’S PLOTTING SOMETHING, SOMEHOW I SHOW UP WITH CAMERAS… BUT THEN AGAIN, I’M ALWAYS WITH MY CAMERAS, AND HE’S ALWAYS PLOTTING…………………THIS PHOTO GALLERY IS CALLED “LEROY PLOTS ANOTHER GOVERNMENT DOWNFALL”

NOW ASK YOURSELF WHY SARAH AND WILLIAM AND FRANS… ARE UPSET RIGHT NOW???