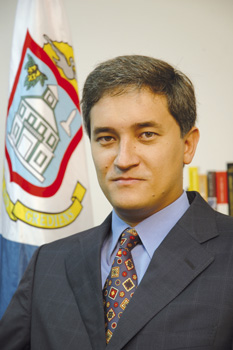 PHILIPSBURG, St. Maarten – Leader of the United People (UP) the Honorable MP Theo Heyliger, confirmed on Monday evening that he will be the next Prime Minister of St. Maarten.

His announcement on the Oral Gibbes program puts to rest any and all questions about whether he would be.

I received 1945 votes, one third of the party (UP) vote; I have to keep that promise. So yes I will be the new PM of St. Maarten,” Heyliger said.

He went on to say as PM he will foster better relationships within the Caribbean, with the sister islands of Saba and Statia as well as Bonaire, Aruba and Curacao.

Despite what can be considered harsh comments towards his person from certain Dutch MP’s, he also foresees a trip to the Netherlands sometime soon as well.

In additional comments, Heyliger assured the general population that he will not be a PM just for the party he represents or just for the people who voted for him and his party.

“Whether you supported the UP or not, as PM I will represent all St. Maarten and have the best interest of all of our people in mind at all times. “The campaign is over.

Once we are sworn in, it’s time to work for our people, all of our people,” he said.