I want to address you now directly, after a week of political turmoil which has culminated in a constitutional crisis. The outcome of this crisis will determine the democratic future of St. Maarten. So it is extremely important that everyone, young and old, understand what it constitutes.

The legal nature of this crisis however is very complicated, although for some of us it seems to be so simple. You may have followed the discussions in the press. Maybe you have even seen copies of the various advices received which have reached the public.
Unfortunately, these advices are all in legal-technical Dutch. So let me try to explain what is going on in plain St. Maarten English.

Let me try to do this step by step:

1. In the Parliament meeting of Wednesday, September 30, there were two items on the agenda.

One item dealt with the prosecutor Guus Schram for which the Minister of Justice was requested to be present and which apparently drew all MP’s to the meeting.
The second item was vague, said to be on the situation of government owned companies. None of the ministers was requested to attend the meeting on this second item and this was brought to the table after the Minister of Justice had left Parliament.

3. The National Alliance and Democratic Party opposition voted in favor of the motion as well as three members of the now-former coalition: MP Richardson, MP Lake and MP Matser. This meant that a majority withdrew its confidence in my Cabinet.
So we had:

4. None of the Cabinet members was given the opportunity to address Parliament before the vote was taken. I feel this defies the rules of propriety and common decency which Parliament should observe.

5. Shortly after the vote was taken, a letter was delivered to the Governor advising him of the vote of no confidence and of the pretended new coalition, claiming to have a basis for a new government that can rely on the confidence of the majority of Parliament.

6. All this was taking place while I was travelling. I heard of the vote of no confidence while in transit in Puerto Rico, on my way back to Sint Maarten. After my arrival, I consulted with several constitutional lawyers to consider the options and called a meeting of the Council of Ministers.

7. The options available centered around the interpretation of two very important articles of the Sint Maarten Constitution:

Article 33-2 states that a minister, who no longer can count on the confidence of Parliament, should vacate his or her function. This article and its explanatory notes do not say when exactly this has to take place, which is connected to the second article.
Article 59 states that Parliament can be dissolved by Landsbesluit (Resolution), so new elections can take place. This requires a decision by the Government, which means that the Cabinet prepares the decision which is signed by the Governor and then co-signed by the responsible minister, in this case yours truly.

9. Given the legal complexity of the situation, I am the first to acknowledge that the Governor found himself in a difficult position. However, the fact remains that he up to this moment:

he has not signed the decision to dissolve Parliament and to call elections;
gnored the political responsibility of my Cabinet;
chose to prepare the formation of another Cabinet, without having the authority to do that.

10. When this became clear, we sought the advice of some of the most important scholars in constitutional law in the Kingdom, four in total. One of the four professors supported the view of the Governor. Three of the four supported the view of the Cabinet. They explained the fundamental importance of the combination of article 33-2 and article 59, since this presents the balance of powers in our Constitution. This means that Government, struck by a Parliament that withdraws its confidence, has the power to strike back by calling for elections. Then solving the conflict is brought back to the people, the roots to this great tree called democracy.

11. When I was sworn in as Prime Minister, like all members of the Cabinet, I swore an oath to uphold the Constitution of our small country, so help me God almighty. That and that alone is what we are trying to do and what I have been fighting for this past week. If the highest levels of Government do not comply with and respect our Constitution, then God help us all!

12. With the entire Council of Ministers, I stand firm in my resolve to protect the Constitution of St. Maarten. Contrary to popular belief, this is not being done because I want to remain prime minister, but because that is what I undertook and swore to do when I accepted to come back from the calm life of retirement, with the blessing of my family, to take up the honorable challenge of becoming your Prime Minister.

13. Knowing what options were open to us, the Cabinet weighed the facts and considered the possible consequences. The facts we discussed were:

a. There is a motion of no-confidence against the entire Cabinet. This motion is motivated in general terms only and none of the Ministers was given the chance to address these terms before the vote. And the motion was signed by some of the very same people who created some of our biggest problems!

b. This Cabinet has been in office now for about 10 months and was forced to spend most of its time putting out fires and navigating serious legislative and operational problems that were left to us by our predecessors. There are, to put it mildly, an awful lot of lingering issues to be dealt with. Expecting this Cabinet to solve all legacy issues in ten months, when they were not addressed for four years, is expecting us to walk on water or change water into wine. Still, it seems that in St. Maarten even Jesus Christ himself could be sent home with a motion of no-confidence.

c. This Cabinet is the fourth since the start of our Country status in 2010 and the first since the 2014 elections. If my Cabinet would have bowed for the majority in Parliament as of September 30, that would mean the start of a 5th Cabinet since 2010. While you, the people, were only allowed to vote once. Going on in the same rate, by 2018, the next year for regular elections, St. Maarten could have 10 Cabinets …………. which will achieve nothing and leave us economically and constitutionally stagnated.

d. It would be the third time since our new Country Status that the Cabinet would change after some MPs, between elections, “jumped ship” from the coalition and others from their own party. Some see the Caribbean as the place where the Carnival never stops. That may be so, but in St. Maarten we must stop the Carnival Coups! They only serve to hinder our country’s progress and damage its international image.
e. There seem to be no real political motives, let alone political principles, behind all this “ship jumping”. Therefore rumors are rampant in our community that the motives would be self-interest or even plain money. I cannot make a substantiated judgment about such rumors. All I can say is that I put my trust in you, the people, to now vote from your conscience and your conscience alone for representatives who, in turn, really deserve your trust.

f. Our small country had the dubious honor to be the subject of no less than three integrity reports, of Wit-Samson, of PriceWaterhouse Coopers and of Transparency International. All three reports highlight “ship-jumping” as an issue that damages the reputation of St. Maarten and undermines integrity of our Government and other institutions.

g. Due to all the fire-fighting we were forced to do these past 10 months, we have not been able – yet – to come up with proposals for electoral reform to curb “ship jumping”. But such proposals only have a chance with the support of Parliament. Such a change needs a clear mandate from the people to deal with this once and for all. As it is now, true electoral reform is as feasible as expecting turkeys to vote for Thanksgiving.

14. Having weighed all these facts, we have considered the options:

Either, we take the path of least resistance offered by article 33-2 of our Constitution by resigning immediately. Then, a 5th government would take our place without the intervention of the voters.
Or, use the countervailing power of Government laid down in article 59 of our Constitution and let the people of Sint Maarten decide who, in their opinion, deserves their trust.

15. The choice was not easy, because of the deep controversy that has developed and that you all are now a witness to. My Cabinet consists of seven members who are not out for themselves. For the love of our Country, we are committed to ensure and improve:

16. These may seem empty words to you in light of the activities of previous ministers and Parliament, but I can assure you, for us they are not. For this agenda we need a sound majority from MP’s who can be trusted, not by us, the Cabinet, but by you, the People.

17. Not much more than a year ago, the second or third “generation” of “ship jumpers” was voted into Parliament. We may have our suspicions or doubts what this has brought them. But we cannot have doubts where this has brought the Country. Are the people of St. Maarten now prepared to cast their votes for candidates who really stand for “Country and not for self”? If it is up to my Cabinet, that is the question that will now be brought to you. I thank you for your attention. 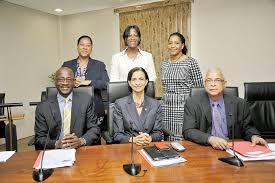