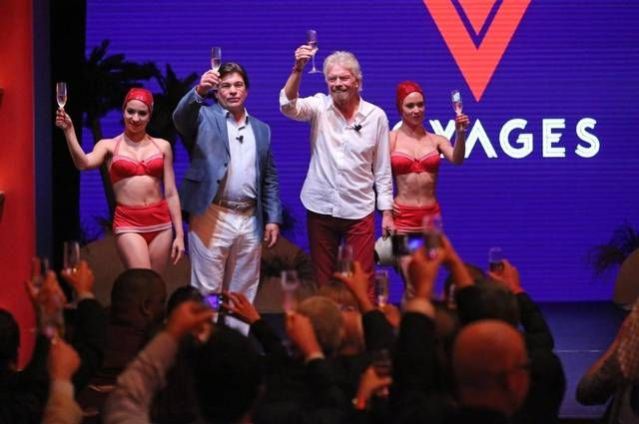 ROAD TOWN, Tortola, VI- Owner of Necker and Mosquito Islands, Sir Richard C. N. Branson has launched a new Caribbean cruise line that is expected to set sail in 2020.
At a press conference in Miami on Tuesday October 18, 2016, the new cruise line announced that it will now operate under the name Virgin Voyages instead of Virgin Cruises.

“I was never interested in going on a cruise,” said Virgin Group founder Sir Richard C.N. Branson during the Broadway-style announcement at Miami Beach’s Faena Theater, “but I’m interested in a voyage. Thousands of future sailors and travel professionals shared their thoughts with us and tasked us with delivering the most irresistible vacation at sea and that our name alone should leave them dizzy with anticipation. I’m excited to reveal we are now Virgin Voyages, and while we have lots of work ahead to build our three ships, we can’t wait to welcome you aboard the ship of things to come.”

Virgin Voyages’ CEO and president Tom McAlpin updated the audience on the progress of the new line, which will have three ships, at least one of them home-ported in Miami, Florida, by 2022.

McAlpin said that the contract between Virgin Voyages and Italian shipbuilder Fincantieri has been signed and that they are nearing the close of a financing deal.

“Our world class partners like Bain Capital Private Equity, Virgin Group and Fincantieri as well as financial powerhouses like Cdp, UniCredit, SACE and SIMEST, showcase Virgin Voyages’ strong backing and commitment to developing an incredible product,” McAlpin said. “This is anything but just another cruise or holiday, it will be a transformational experience delivering a very ‘Virgin style’ of adventure.”

Fincantieri will begin cutting steel on the first ship in February 2017, and there will be a keel-laying ceremony in Genoa toward the end of 2017, when, as the CEO put it, “ship gets real.”

Cruising with the environment in mind

Inspired by Branson’s leadership on environmental issues and desire to “do good in the world,” McAlpin also announced the line’s partnership with Swedish clean energy company Climeon.

In a first for the cruise industry, Virgin will install Climeon Ocean, a system that will transform low-grade energy into clean electricity on all three of its ships. The resulting environmental impact will be an estimated 5,400 tons of carbon dioxide savings annually per ship, the line says, — an amount that would take 180,000 trees 30 years to absorb.

Virgin Voyages’ first ship will arrive at PortMiami in 2020 with capacity for 2,700 “sailors” and 1,150 crew, and will sail a Caribbean itinerary to “ports that deliver unique and very social experiences,” the line said.

Where the new Virgin Voyages may take travelers has not yet been announced, but Branson did mention one destination that is on his list.

When asked if Cuba was a potential port, Branson immediately replied, “Yes!”