OPINION :Questions posed by opposition Member of Parliament Tamara Leonard (UP) regarding alleged “hefty contracts” at GEBE (see related story) deserve answers. Judging an amount for cleaning around the local utilities provider’s meter boxes and houses is tricky, but the US $900,000 per year mentioned does seem like a lot of money.

The claim that former Minister Maurice Lake or his firm is being paid some US $12,000 per month as advisor to the board of the Government-owned company also begs for clarification. While quality isn’t cheap, one can’t help but wonder if in this case such a relatively high fee was really necessary.

More explanation on this matter can hopefully be given during Friday’s continuation of the Parliament meeting on the state of affairs at GEBE. Of course, the water and electricity company is to be operated without political interference, but the country and its people are ultimately the sole shareholders to whom both management and the Supervisory Board must be accountable.

Speaking of which, there were various power cuts and surges on Wednesday, with especially the latter sparking concern among consumers. Persons who called GEBE were first asked to hold, after which someone closed the line without saying a word.

It’s understandable that when these problems occur technicians get very busy. However, it regards a so-called alarm number for emergencies that could include dangerous situations such as, for example, downed live power cables.

Whatever happens, they should at least be able to answer the phone.GEBE BOBOL 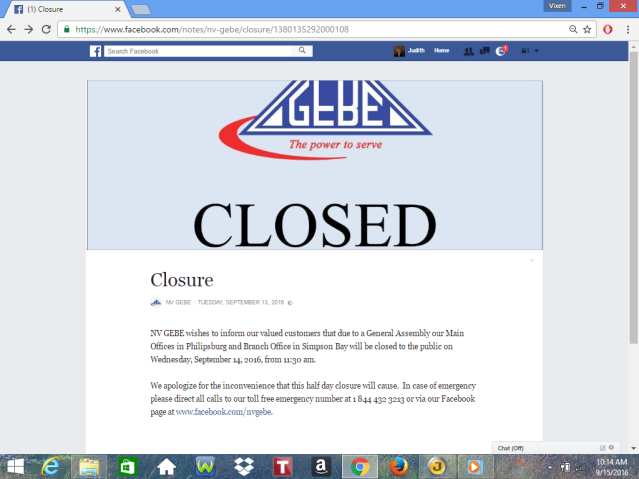