Hurricane Irma strengthened back into a Category 5 storm Friday night as it made landfall on the Camaguey Archipelago of Cuba with maximum sustained winds of 160 mph, according to the National Hurricane Center.
Irma’s status as a Category 4 storm was relatively short-lived, having been downgraded from a Category 5 storm early Friday morning.

As of 11 p.m. ET, Irma was about 300 miles from Miami and moving about 13 mph toward the west, the National Hurricane Center said.

Hurricane Irma is forecast to hit the Florida Keys as a Category 5 storm.

Meteorologists expect Irma to make landfall in the Keys between 5 a.m. and 7 a.m. ET on Sunday. Overnight projections of Irma’s path showed less of a threat to the Carolinas as the monster storm appeared likely to move directly up the middle of Florida and curve inland.

The National Weather Service’s Key West office issued a dire warning in the wake of the updated forecast.
“Obviously Hurricane Irma continues to be a threat that is going to devastate the United States,” Brock Long, administrator of the Federal Emergency Management Agency (FEMA), said at a press conference Friday morning. “We’re going to have a couple rough days.”
source yahoo news
The National Hurricane Center on Friday cautioned that Irma is “extremely dangerous,” with maximum sustained winds of 155 mph, which are strong enough to uproot trees, bring down power poles and rip off the roofs and some exterior walls of well-built frame homes.

The National Hurricane Center issued its first hurricane warnings for Florida overnight, warning residents that “preparations to protect life should be rushed to completion.” 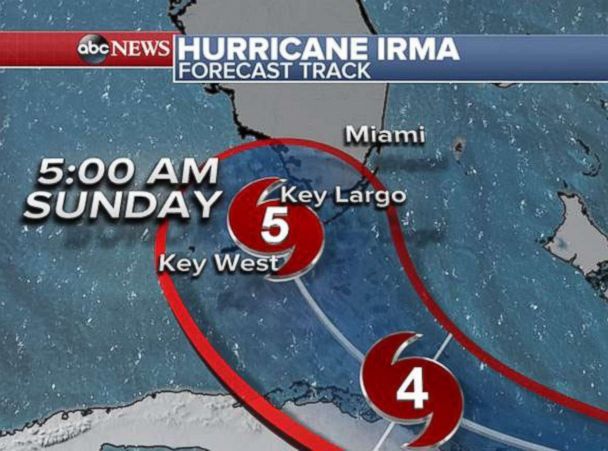 Mandatory evacuation orders have been issued for barrier islands, coastal communities, low-lying areas and mobile homes across Florida, including the counties of Brevard, Broward, Collier, Indian River, Martin, Miami-Dade, Monroe, Palm Beach and St. John. According to the Florida Division of Emergency Management, 5.6 million Floridians have been told to evacuate.

Meteorologists predict Irma will continue to weaken as the storm moves inland Sunday into Monday. Irma will approach Jacksonville on Monday around 8 a.m. ET with winds of about 75 mph, which would make it a dangerous Category 1 hurricane. Then, Irma should weaken rapidly to a tropical storm, depression or a remnant low later Monday as it moves across state lines into Georgia, then potentially Alabama and Tennessee on Tuesday into Wednesday, meteorologists say.

Disney World announced in a statement Friday afternoon that its theme parks and water parks — as well as Disney Springs and the ESPN Wide World of Sports Complex — would be closing early Saturday and remain closed through Monday. Disney’s resort hotels will remain open.

The worst of Irma’s winds and storm surge are projected to be near Marathon and Key Largo, but meteorologists say Miami and heavily populated southeastern Florida will still be on the strongest side of the storm.

Tagged as: Florida-bound Hurricane Irma strengthens back into a Category 5 as it makes landfall in Cuba