PHILIPSBURG – The Council of Ministers has invoked Article 59 of the Constitution to dissolve Parliament and send voters back to the polls for new elections.

If elections were to be held it would be to elect the ninth Parliament in nine years since St. Maarten became a country within the Dutch Kingdom on October 10, 2010.

Caretaker Prime Minister Leona Romeo-Marlin made the announcement of invoking of Article 59 at what was called an urgent Council of Ministers press conference on Monday, the invitation of which was received by The Daily Herald three minutes before the conference was scheduled to start.

In a statement read during the live broadcast, the PM levelled a number of accusations against coalition and opposition MPs as well as of ministers within the Council. She alluded to statements she made last week that the current political impasse would have been addressed and clarity sought when Governor Eugene Holiday had returned to the country and she would have then informed the population.

She said a culture of fear increasingly governed the now former coalition and this created a toxic unworkable environment. “The country became ungovernable, with many individual coalition members in Parliament who thought that they should dictate what the COM (Council of Ministers), or an individual minister, should do, with complete disregard to our constitution and in violation of the path of office they had taken,” the PM said.

“The higher tenet of the Trias Politica was consistently at jeopardy. We were also all aware that there are influential people, outside of Parliament, actively attempting to take the country’s drivers’ seat, whilst comfortably sitting in the back and not being accountable. Unfortunately, we had to conclude and as the population can see, they have won.”

The PM said the Council was aware that there were Parliament coalition members secretly or even openly siding with the opposition, individually holding the entire coalition hostage or threatening to do so. “We were quite cognizant of the tactics to dismantle the COM, one by one until a weakened COM was in place and they would in turn control the majority in COM. We were also cognizant of the sabotage within the COM.

“Having these members move to the other side of the isle does not guarantee stability and unity the country needs. Therefore, On September 22, the Council of Ministers invoked article 59, allowing the voters of St. Maarten the opportunity to decide on the future of St. Maarten.”

She said the mandate was given to the Council in the governing programme to work with the Netherlands and the World Bank. “As Prime Minister, I was given the mandate to bring home the US $580 million to help reconstruct and build back St. Maarten. That mandate was delivered. The same coalition that appointed us in the seats never, once stated to end the working relationship with the Netherlands and the World Bank, or came with a direct viable and executable alternative and so, the COM stayed on its course, despite the criticisms, the sabotage, the deliberate defamation and the spinning of many, we stayed the course.”

Romeo-Marlin said she has always acted in a transparent, open and integer manner. “I have secured the establishment of the Trust Fund, the Integrity Chamber and I have personally overseen the preparation of more than US $125 million worth of reconstruction and resilience projects that will be implemented in the coming years. The financing of the reconstruction airport is set to close in October unless the latest political turmoil results in the investors pulling back. It has been a sensitive dossier but we were almost there. The Council of Ministers worked hard, and has paved the path for the execution of the rest of the Trust Fund projects,” she said in her prepared statement.

St. Maarten is surfing on a high wave as a country and despite the challenges that Irma and Maria brought the country is “doing better than expected. Despite the long time that it took to start the disbursements reconstruction funds flowing, we have made tremendous progress. Surfing on a high wave also means the possibility to crash down with great force. I sincerely hope that whoever takes over the helm to navigate this country forward will be able to stay the course and bring unity and stability to the country, because without that execution of policies is impossible.”

According to the PM, the line has been drawn and it is integrity or nothing. “I am very well aware that electorally I have no leg to stand on as I was entrusted the position of Prime Minister by default. I have accepted to take up this challenging role respecting the constitution and looking out for the best interests of our country. Moreover, I am proud to have been able to serve my country in this difficult period after Hurricane Irma. It has not been easy. This episode has been testing on my personal life, my health and my family. I have withstood extensive abuse, fake news, sabotage, bullying, threats and deceptions.”

Romeo-Marlin said she has nothing to gain from new elections, as she is not interested in continuing in politics at this current time and in this current environment. “What I would like to see is stability and integrity for this country. If no one is up to the task to do the right things and do them the right way, if none of us has the courage to choose for integrity, then we do not deserve to continue in power. So, regretfully, once again the time has come to let the people decide. I have to rely on the conscience of our people and I will urge them to carefully consider their vote and to have the courage to choose for the moral high ground. To vote for stability and integrity. Our people and our country deserve this.”

The move by the Council of Ministers on Sunday was done on the same day as the announcement of a new majority nine-member coalition which included the National Alliance (NA), United St. Maarten Party (US Party) and newly declared independent Members of Parliament (MPs) Dr. Luc Mercelina and Chanel Brownbill. The new nine-member coalition leaves the UD/SMCP coalition with five seats in the 15-seat Parliament.

The UD/SMCP coalition was placed in limbo when UD faction leader MP Franklin Meyers announced during the closing of the parliamentary year that he was pulling his support from the coalition. He later declared himself independent, but said he was open to talks with the coalition he broke ties with. He later issued a lengthy statement outlining his reasons for leaving the coalition, but gave no clear indication about what his next step would have been. 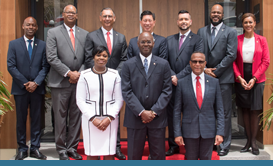