By Sint Maarten News on September 30, 2019 • ( Leave a comment )
In a catastrophic hurricane such as Dorian, the loss of lives and homes can be overwhelming. But even in the midst of devastating sadness and disbelief, a far less urgent but perennial question can tug at the back of the mind. What is the impact of these storms on wild creatures, such as birds?
It is too soon to know the extent of Dorian’s impact, and really too soon to ask. Ecological post-mortems are nowhere near the first order of business. But interviews with scientists and the findings in a paper published Sept. 15 by Ecology Letters suggest that many birds are resilient, and that when a hurricane does push a species over the brink, it is almost always a species that humans have put there in the first place.

If what we’re worried about is extinction, “we’re the driving force,” said David Steadman, curator of ornithology at the Florida Museum of Science, who has done a vast amount of research on Caribbean birds.

By destroying the environments where birds live, introducing alien predators and damaging the environment in other ways, humans gradually put birds, and of course other species, at risk. A hurricane or another disaster may deliver a final punch, but it is not the underlying cause of extinction. Christopher Elphick, an ornithologist at the University of Connecticut and one of the authors of the new paper, said development and sea level rise were the slow and sure killers.

He compared it to heart disease: “Eating just a little too much fat in your diet is what causes the heart attack. But shoveling snow is what pushes you over the edge.”

Birds do die in hurricanes, of course, and suffer other indignities. Dorian blew some to Nova Scotia. And a buoy cam southeast of Charleston, S.C., caught images of some hiding out in the hurricane’s eye. Who knows where they ended up? Fortunately, Hurricane Humberto, which had people in the Bahamas worried about a second hit, took another path.

Scientists concentrate on species and subspecies. In terms of the Bahamas, only speculation is possible at the moment. One species on the extreme edge, the Bahama nuthatch, only one or two of which were known to be living before Dorian, may well have been pushed to extinction. Others that are in trouble, like the Bahama parrot, might have suffered little impact.

Diana Bell of the University of East Anglia said that researchers from her lab found a Bahama nuthatch last year. That’s one single bird. She said another team reported finding two.

The Bahama nuthatch was already thought to be extinct before Dorian nailed Grand Bahama, where one or two nuthatches may have still been alive.

“This could have been the coup de grâce for the nuthatch,” Steadman said.

Steadman, who has been researching birds in the Caribbean and elsewhere for many years, said that in contrast the Bahama parrot — which is in trouble, but not as severely — might have done just fine.

Much of the parrot population dwells on the south of the island, which was hit but not devastated. And the parrots nest in cavities in the island’s limestone, and no doubt would have hunkered down during the storm. “I would doubt if there’s so much negative impact on that parrot population at all,” he said.

Other birds that are struggling there are the Bahama swallow and the Bahama oriole. 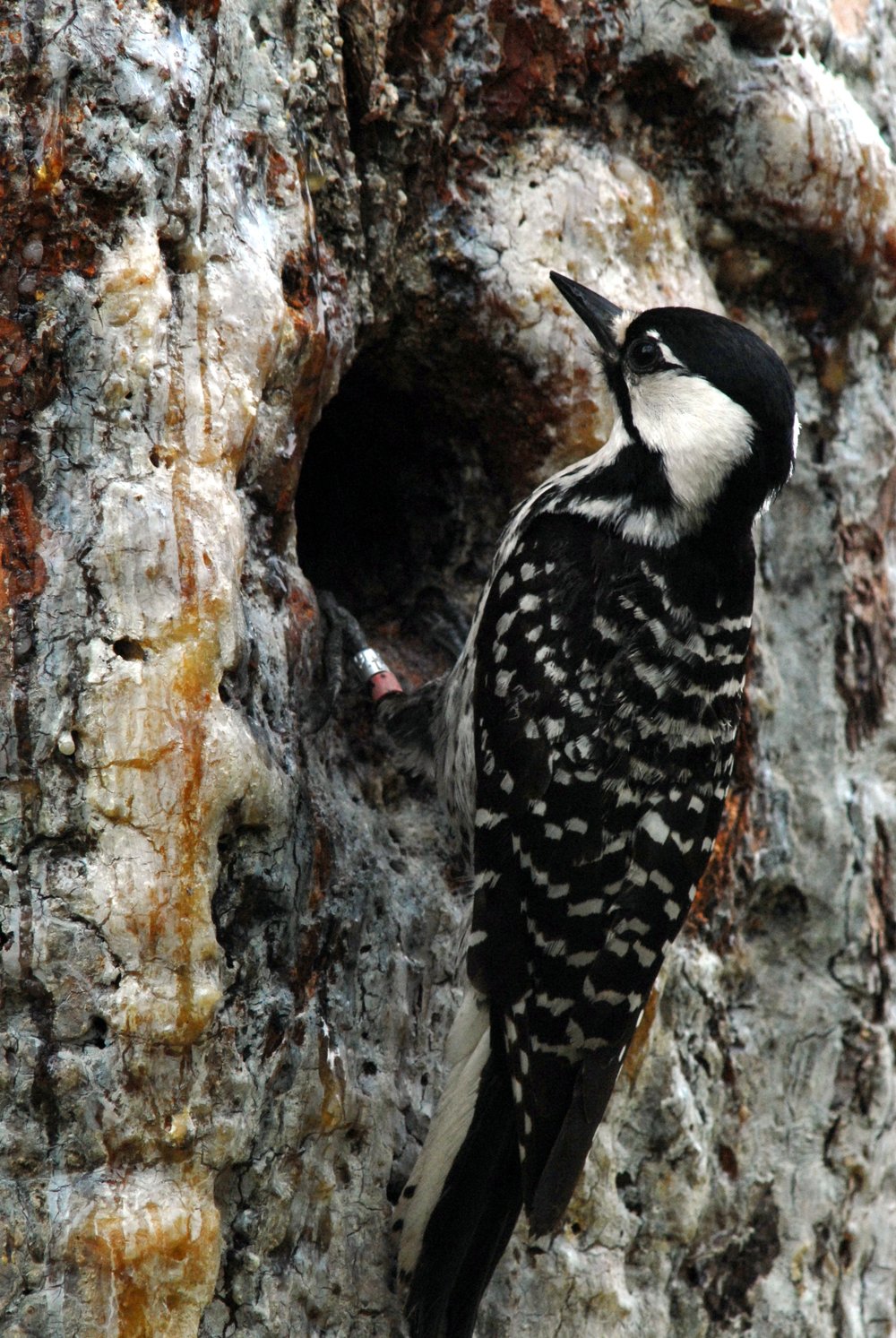 This endangered red-cockaded woodpecker is feeding young at the nest, in a cavity of a longleaf pine in Georgia. Active management and restoration of longleaf forests can help recover this species. (John Maxwell for U.S. Fish and Wildlife Service (CC BY 2.0))

Past hurricanes have hit certain bird populations very hard, but selectively. Hurricane Hugo in 1989 brought Category 5 winds to the Francis Marion National Forest in South Carolina that knocked down the old growth nesting trees of the red-cockaded woodpecker. The bird nests in tree cavities in old-growth forests, and the storm snapped old trees in two; 87% of the forest’s 1,765 cavities were destroyed.

Joseph M. Wunderle Jr. of the U.S. Forest Service, who is based in Puerto Rico, said the managers of the forest responded with artificial cavities to help save the woodpeckers that remained.

Wunderle has studied and written about Caribbean birds and hurricanes for decades. Hurricane Maria, he said, may have knocked out a group of Puerto Rican parrots that live at a high elevation. “The official count now is two birds in the Luquillo Mountains,” he said. The power of the hurricane played a role. Colleagues of his told him that when Maria struck as a strong Category 4 hurricane in September 2017, it killed 17 of 20 parrots wearing tracking devices. “They found them dead under fallen trees and tree branches,” he said.

The St. Kitts bullfinch also fell victim to hurricanes in the late 19th century, Wunderle said. The bird survived for a while and disappeared, he said. It had lived in a mountain forest on St. Kitts, feeding on fruits and seeds, and the plants took a long time to recover. Why didn’t it move to the lowlands? At lower elevations wild areas had been replaced with fields of sugar cane, by humans.

Insect eaters do a lot better, Wunderle said. Even if adult insects are lost in a hurricane, there are eggs, pupae, larvae. And there is a lot of dead wood, which many insects love.

The Cozumel thrasher is another example. The island was hit by Hurricane Gilbert in 1988 and Hurricane Roxanne in 1995. The introduction of alien predators to the island may have contributed to its disappearance.

When bird populations are reasonably widespread, they can, however, be quite resilient in the long term. 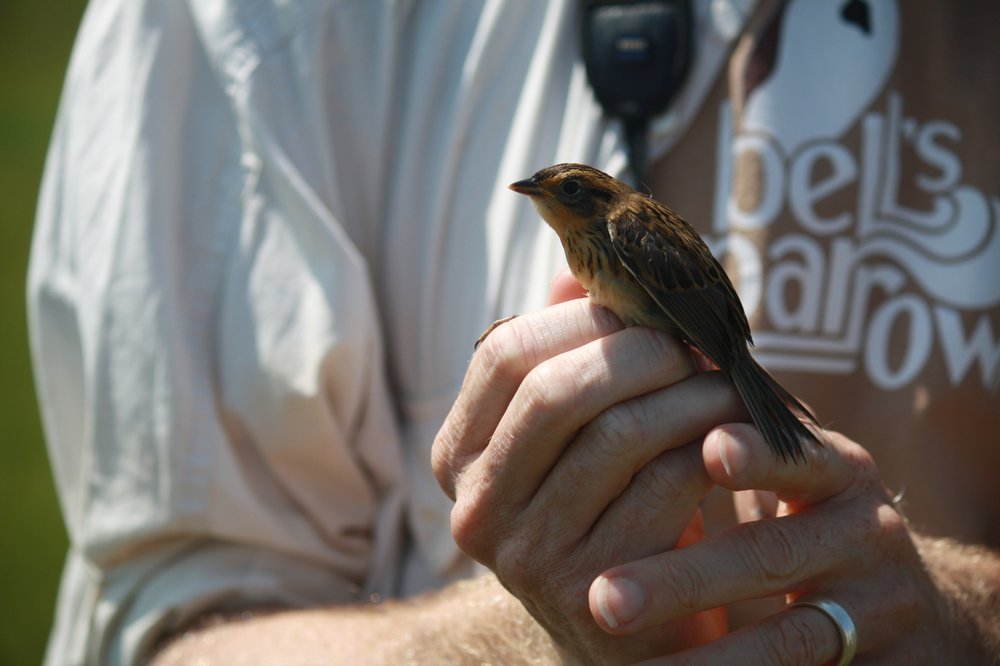 Salt marsh sparrow Professor Chris Elphick, of University of Connecticut, holds a female saltmarsh sparrow after she was banded by his student assistants. (U.S. Fish and Wildlife Service/Charlotte Murtishaw)

Elphick, his colleague Chris Field and other researchers from the University of Connecticut were inspired to look at the effects of catastrophic storms on marsh birds because they were in the midst of surveying bird populations in Eastern coastal marshes when Hurricane Sandy struck in 2012.

They were surprised to see that the effect on bird populations was not that great. Individual birds certainly suffered, and that often prompts an immediate reaction from the public and scientists. “People see dead birds and say, ‘Oh my God,'” Elphick said. But individual deaths don’t necessarily mean trouble for the species.

Their team wanted to understand the long-term prospects for bird species over 20 years after a disaster. They created a computer model and after putting in data on the size of a population, its pattern of reproduction and other factors, they ran simulations to see how bad a species would have to be hit by a disaster for it to have an effect on its long-term prospects. 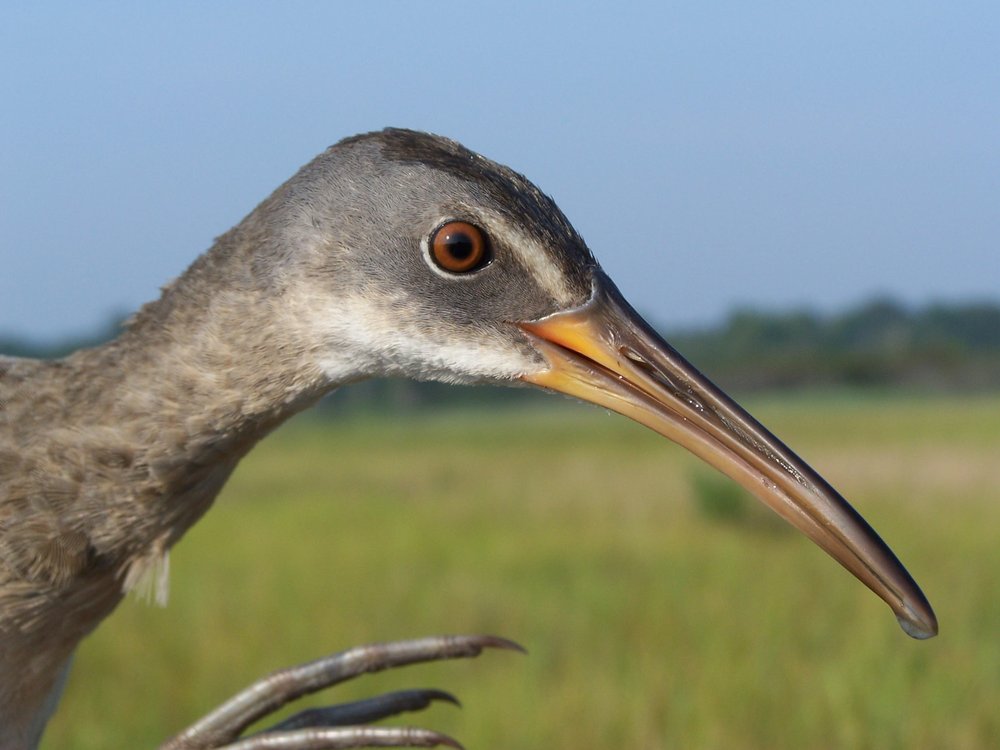 They looked at four birds: the clapper rail, willet, saltmarsh sparrow and seaside sparrow. For saltmarsh sparrows and clapper rails, almost all adults had to be killed for there to be a change in the long-term prospects of the population. The seaside sparrows and willets weren’t quite as robust, but they still needed to experience reproductive failures of more than 75% for their long-term survival to be threatened.

In general the team found that the coastal birds they studied were highly resilient to individual storms. They believe their simplified model — which concentrates on deaths and reproductive failures, not the strength of storms — could be useful for projecting what is likely to happen to other species facing disasters.

Of course, Elphick said, “there are two big caveats to our general result.” The species they studied are very small, or very localized. And that is exactly the situation for island birds, particularly where humans have changed the environment.

Climate change could bring an increase in frequency and strength of hurricanes that could change their calculations somewhat, Elphick said. But the biggest threats to the birds he studied are the gradual erosion of habitats by human development and, for marsh birds, development of the marshes where they live, and rising sea levels, which make average tides and storms more dangerous during nesting periods.

As Bell put it: “Birds evolved to withstand hurricanes. They didn’t evolve to withstand destruction by humans.”