Hurricane Lorenzo is a large and powerful hurricane tracking towards the UK across the central Atlantic. A series of hurricane and tropical-storm watches are in effect across the Azores as the storm tracks closer to the region. Lorenzo is currently packing winds of 105mph, making it a Category 2 storm according to the Saffir-Simpson Hurricane Wind Scale. But what is the latest of this barreling storm which is heading straight for the UK?

Hurricane watches are in effect for western and central Azores, including Flores, Corvo, Faial, Pico, São Jorge, Graciosa and Terceira.

While a tropical storm watch is in effect in the eastern Azores for São Miguel and Santa Maria.

According to the National Hurricane Center’s latest advisory, issued at 5am AST (10am BST), the storm was located near latitude 28.7 north, longitude 43.1 west, roughly 690 miles west southwest of Flores in the western Azores.

The storm had maximum sustained winds at 105mph and was moving north northeast at 22mph.

Hurricane Lorenzo’s track is expected to continue its track in the same general direction but at a faster forward speed over the coming days..

On its forecast track, the centre of the storm is predicted to pass near the western Azores early on Wednesday.

Only slight weakening of the storm is expected before Lorenzo hits the Azores, with faster weakening expected on Thursday.

These winds are not the only hazard posed by this dangerous storm.
The rainfall also poses a risk, with an expected two to four inches of rain expected to batter the western Azores and could potentially cause life-threatening flash flooding.

Lorenzo is also generating swells which are spreading across much of the North Atlantic basin and which are likely to cause life-threatening surf and rip current conditions.

Met Office forecaster Steven Keates said: “Lorenzo is a real beast of a storm.
“It will be one of Europe’s strongest-ever tropical storms, as the Azores are part of Europe.

Hurricane Lorenzo path latest: A map showing the most likely arrival time for tropical-storm-force winds (Image: NOAA)
Hurricane Lorenzo path latest: A peak wind gust map of the UK on Wednesday, October 2 (Image: WXCHARTS)
“Lorenzo is expected to move to the UK by Thursday – bringing a couple of days with potentially worse conditions than this weekend.

“There are scenarios from gales to storm-force 70mph-plus gusts, but there’s uncertainty. Big waves and heavy rain are likely, with the west most likely to be affected.

“Before then, five or six inches’ rain will fall between Saturday and Tuesday in the wettest places. It’s clearly enough for flooding concerns.

“People should keep up-to-date with warnings and consider their travel options.”

Over the weekend, it was reported that Hurricane Lorenzo hit a wind speed of around 160mph, making it a Category 5 hurricane.

The storm has weakened since that time but it will still pose a risk.

It is likely that tropical storm winds will hit the UK through Wednesday night, as the storm continues to pass over the north of Great Britain.

Met Office meteorologist Alex Burkill added “Our attention then turns to Hurricane Lorenzo, this is tracking northeastwards across the Atlantic, it could head towards the UK.

“It won’t be a hurricane by the time it does so, but there is the potential that it will bring something more unsettled by the end of the week.” 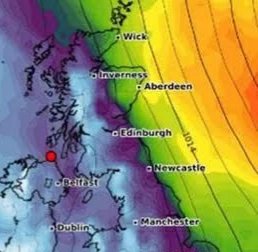