WILLEMSTAD – “Curaçao needs to execute the reforms that will sustainably strengthen the country in a quick and decisive manner”, is the statement of the Board of financial supervision Curaçao and Sint Maarten (Cft). The stipulation that the Kingdom Council of Ministers issued to Curaçao in July, combined with the execution of the Growth Strategy, comprises opportunities to turn the tide in a sustainable manner. 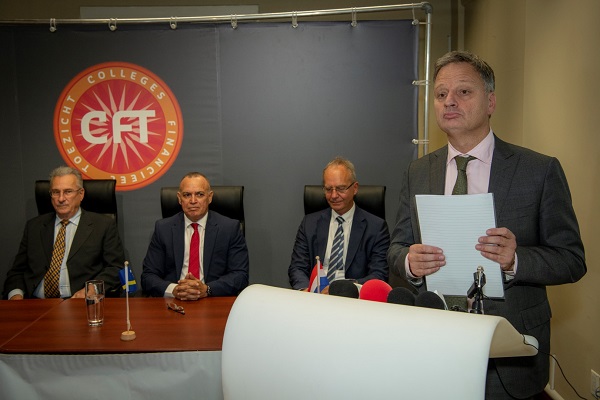 The Kingdom Council of Ministers on July 12th, 2019, issued an instruction to the government of Curaçao to balance the expenditures and revenues in the long-term budget. The instruction determines, among others, that an expected deficit in 2019 has to be compensated in the same year and the combined deficits of 2017 and 2018 of 175.3 million guilders must be compensated with surpluses in 2020, 2021 and 2022. The payment arrears on the debts to the General Pension Fund Curaçao (APC) and the Social Insurance Bank (SVB), for which the payment term has expired, deem to be eliminated from these same surpluses as well.

The unemployment in Curaçao is high compared to other Caribbean islands. Among the youth that even amounts to 33 percent. In the Growth Strategy the government has indicated how the economy can be reformed. This mainly concerns structural reforms, such as the reform of the labor market, the strengthening of administrative power and the realization of a more encouraging entrepreneurial climate, so that unused human and financial capital can actually be used.

The forecasts for the 2019 financial year have been adjusted and the budget, including the first budget amendment, shows a balanced regular service. There has been an increase in tax revenues, partly attributable to an incidental windfall of 42.1 million guilders from the Kingdom tax arrangement (BRK). For 2019 the task to control expenditures and actually collect income should still be met, even after the fire at the Tax receiver.

The opening of the new hospital Curaçao Medical Center (CMC) is scheduled for November 15th, 2019. The government in August submitted a request for an additional loan of 200 million guilders. In anticipation of updated business case with the corresponding second opinion, which has still not been received, the Cft sent a provisional response on September 27th, 2019. This includes the possibility to borrow 103.7 million guilders via the current registration, provided that a number of conditions are met. In addition to the business case, this also covers among others the additional costs of operating the CMC in comparison to the operation of SEHOS. After receiving the requested documents – now promised to be submitted in five weeks – a definitive response from the Cft to the loan request will follow.

Most of the sub-projects from the Roadmap leading up to an unqualified auditor’s statement for the 2021 financial statements have already been initiated. The country foresees that there will not be sufficient capacity for their execution. The Cft therefore advises the government to make use of the possibilities the Growth Accord provides, by requesting support for this purpose as well. Once this support has been obtained, it will be essential that explicit focus be put on securing the acquired knowledge and skills.

The Cft visited Curaçao from October 21st to 23rd, where meetings were held with the Governor, the Minister of Finance (twice; once the Minister was supported by the MRT), the Council of Ministers, the Financial Committee of Parliament, the Growth Strategy Progress Committee, the Government Accounting Firm foundation (SOAB), the management of SEHOS, the Social Insurance Bank (SVB) and the Central Bank of Curaçao and Sint Maarten (CBCS).

On Monday, October 21st, the chairman of the Cft, Professor Raymond Gradus, gave a public lecture entitled “Financial supervision and economic growth”. The presentation can be consulted via the Cft website: http://www.cft.cw.