Another batch of drugs has been found on navy ship Johan de Witt. It concerns 11 kilos of hard drugs, most likely cocaine, spread over several packages. The drugs were found in the context of an investigation into a soldier who was previously arrested with drugs.

This soldier, a 23-year-old man from Haarlem, was detained on the ship in Curaçao last month with the same amount of cocaine in his backpack . The navy transport ship had just returned from the Bahamas, where it was deployed for a relief mission after Hurricane Dorian.

The Marechaussee, in charge of the investigation, is still investigating whether the arrested soldier is also responsible for the new batch of drugs. The cocaine has a total street value of at least 1.1 million euros.

“After he was arrested, we received specific indications that there were more drugs on the ship,” said a spokesperson for the military police. In Den Helder, where the ship is now located, the Johan de Witt has been extensively searched. The personnel that came on board were checked. Three helicopters were also searched.

The spokesperson does not want to say where the drugs were hidden. 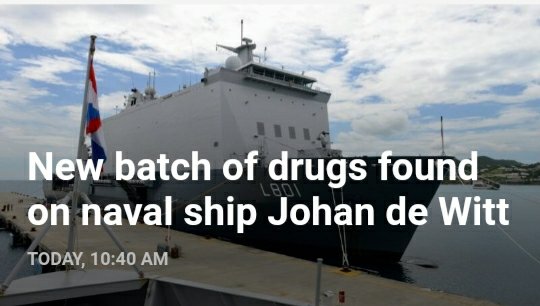