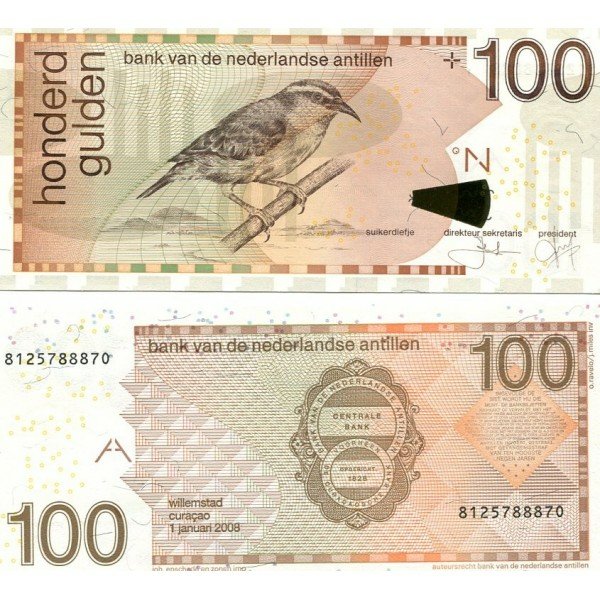 The Central Bank of Curaçao and Sint Maarten warns against false banknotes of 100 guilders in circulation on Curaçao. The notes are of extremely good quality and almost indistinguishable from real ones.

Yet there are also striking differences. The paper that has been used feels thicker, stiffer and coarser compared to the paper of a real banknote.

That note also contains the shadow watermark, the logo of the Central Bank, which can be recognized by a gradient of shades lighter and darker than the paper around it when the note is held up to the light.

The relief of the shadow watermark can also be seen when a real banknote is held flat and you can feel it.

A tactile ink layer has been applied at various places on the front. For example the value indication in numbers, the texts and the bird. You can also feel the identification mark for the visually impaired in the front right corner of the ticket.

The ink of the lowercase letters of the text included in the block on the back of the banknote is somewhat lighter and has the effect of changing color (light to somewhat dark color) while the ink of the text on a counterfeit banknote is darker in color and has (virtually) no transition of color. The small texts can be read clearly on the real notes.

With the counterfeit banknotes, these (lowercase) letters are often less sharp and therefore less legible.

The counterfeit banknotes have virtually no planchettes (glitter). On a real banknote, the planchettes change color as you turn the banknote in different ways.

When placing a line on a counterfeit banknote with a “counterfeit money pen”, the pen marks a black / brown line on the banknote, whereas this is not the case on a real banknote.

The border on the underside of the counterfeit banknote is wider than that of a real banknote.

The Central Bank asks the public to be alert and to check a note, in particular 100 guilder notes. In the event of serious doubts, it is advisable to refuse the banknote and to involve the police. 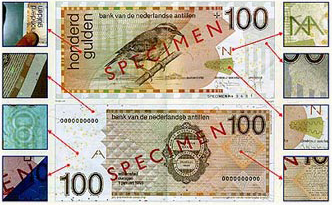