The Murder Of Kenny Mitchel: How a Death at a Caribbean Resort Became an International Incident NYTIMES

By Sint Maarten News on November 23, 2019 • ( Leave a comment )
Two men fought in a desperate struggle last April inside a suite at a tropical resort in Anguilla, and only one of them would leave alive.

But what began as a one-on-one encounter has since ballooned into an international dispute over whether the survivor, an American banker, should have been charged with manslaughter.

Officials, lawyers and lawmakers in the United States find themselves squaring off not only against the authorities in Anguilla, a Caribbean island of some 15,000 people, but potentially also against Britain, of which it is a territory.

While the case’s outcome is far from predictable, the present standoff could lead to extradition proceedings against the American charged in the case, Gavin Scott Hapgood, an investment banker in Darien, Conn.

The revelation in September that a lethal amount of cocaine was found in the bloodstream of the dead man, Kenny Mitchel, has not slowed the criminal proceedings against Mr. Hapgood.

United States senators on both sides of the aisle and President Trump himself have criticized the prosecution of Mr. Hapgood and the island’s failure to guarantee his freedom to return home between hearings.

“Something looks and sounds very wrong,” the president wrote on Twitter last month. “I know Anguilla will want to see this case be properly and justly resolved!”

Tensions behind the scenes came to the fore this month when Mr. Hapgood failed to appear at a court hearing in Anguilla, citing concerns for his safety and the possibility that his bail could be revoked.

Mr. Hapgood’s refusal to attend the hearing was immediately criticized by officials in Anguilla, with its attorney general, premier and governor all speaking out.

“I invite those making or repeating these fabrications — including those in public office — to acquaint themselves with the facts by visiting us,” Mr. Foy said in a statement, praising the island’s “peace, serenity and calm.”

The attorney general in Anguilla, Dwight D. Horsford, said in a statement that his office was seeking a warrant for Mr. Hapgood’s arrest and would circulate it through Interpol, the international police organization, which would effectively make him a wanted man in much of the world. The status of that development, and the likelihood of an international warrant, were unclear this week.

On April 13, Mr. Hapgood, 45, was visiting the beachside Malliouhanaresort with his wife and their three children when he answered a knock on the door. Mr. Mitchel, 27, a uniformed hotel employee, said he had come to fix a sink. Mr. Hapgood said none of the sinks seemed in need of repair, but invited him inside.

The two men began fighting, crashing into a bathroom and down to the floor. The much larger Mr. Hapgood, a former football player, pinned Mr. Mitchel for some of 30 minutes before the police showed up. Other employees arrived in that time and asked him to release Mr. Mitchel, but he refused, saying later he was afraid they were all working together.

Mr. Mitchel lost consciousness and was pronounced dead a short time later at a hospital. Days after the incident, Mr. Hapgood, who said he was defending himself against a robbery attempt, was charged with manslaughter and spent several hours in the island’s tiny prison before a judge allowed him to return to Darien on $74,000 bail.

After that tumultuous week in April, the case dragged on until a bombshell revelation in September: The medical examiner in Anguilla, who first had ruled Mr. Mitchel’s cause of death was asphyxiation in a prone position, revisited his finding and said Mr. Mitchel died of a cocaine overdose, according to the revised autopsy obtained by The New York Times. Mr. Mitchel had twice the amount of cocaine in his system that has been shown to be lethal in some people.

A preliminary hearing that began in September was to resume on Nov. 11, but Mr. Hapgood stayed in Connecticut. He feared his bail could be revoked, in which case he could face a year or more in jail on the island awaiting trial, his spokesman said. Months ago, an Anguilla judge, in allowing bail, noted that some of the corrections officers in the prison were relatives of the dead man.

“We understand there will be people in Anguilla who say Scott is running from a trial,” his lawyer, Juliya Arbisman, said in a statement. “That is 100 percent false. There is nothing Scott wants more than to clear his name and get his life back. But he cannot clear his name if he is dead, or if the legal process by which he is bound is fundamentally biased and unjust.”

The Hapgood family, which gave terse, prepared statements through a crisis-management firm in months after the incident, has gone on the offensive in recent weeks, organizing a network of supporters to raise cash and speak out against what it sees as a wrongful prosecution.

Mr. Hapgood’s wife, Kallie, appeared on “Fox & Friends” in October and made a direct appeal to one man who she believed could come to her husband’s aid: “I’ve seen Trump help Americans around the globe, and we really need his help,” she said.

Minutes after her appearance, Mr. Trump tweeted about the case, saying “something looks and sounds wrong.”

The Hapgoods later held a news conference on the steps of Darien Town Hall, flanked by dozens of supporters holding small American flags and signs that read “Justice for Scott,” “Drop the Charges” and even “Save Scott Hapgood.”

In Anguilla, where dozens of people attended a funeral for Mr. Mitchel in April — the first of two, with the other in his native Dominica — supporters for the dead man, who had a 2-year-old daughter with his former girlfriend, have said drug use and violence were not in his character.

Still, their descriptions of Mr. Mitchel as a fun-loving resort worker were complicated by an arrest on a rape charge in the days before his death; Mr. Mitchel’s former girlfriend, Emily Garlick, told the police he had attacked her. That case was pending when he died, and Ms. Garlick has since retracted her accusation, calling the incident an argument.

A former member of Parliament in Anguilla, Haydn Hughes, seemed to speak for many of the islanders in a recent video about the Hapgood case posted on Facebook.

“We still want him to return to face the court and to prove that our system is far more fair than even his homeland’s,” Mr. Hughes said, “and we are an objective, peaceful people.” 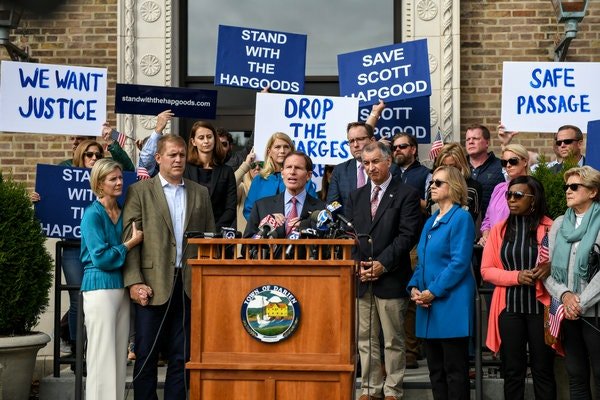